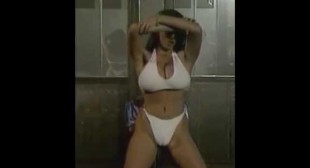 She has attained minor celebrity status in the United Kingdom, where she has appeared on a number of mainstream television programmes, such as They Think It’s All Over, I’m Famous and Frightened!, The Weakest Link, and Celebrity Four Weddings. She has also appeared in documentaries about the lives of glamour models and was featured in Martin Gooch‘s 2002 film Arthur’s Amazing Things.