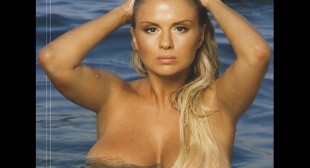 Anna Semenovich loves running and letting her very large boobies move all over the Pleace at Vidworthy After Dark.

Early in her career, Semenovich skated with Denis Samokhin. They competed at two World Junior Championships, placing 8th in 1993 and 7th in 1994. After a brief partnership with Maxim Kachanov, placing fifth at the 1994 Goodwill Games, she teamed up with Vladimir Fedorov in 1995. They won the Finlandia Trophy twice and competed on the Grand Prix of Figure Skating. The highlight of their partnership was competing at the 1998 World Championships, where they placed 15th. Their partnership ended in 1999 and Semenovich teamed up with Roman Kostomarov for one season. With Kostomarov, she is the Russian bronze medalist and competed at both the 2000 European Championships and the 2000 World Championships.